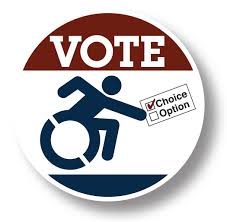 Now, more than ever, the disability vote is taking center stage as one of the most important aspects of this year’s election. A new study by Rutgers University – Projecting the Number of Eligible Voters with Disabilities in the November 2020 Elections – shows the incredible growth of eligible voters with disabilities and asserts a likely connection to ” the aging of the population and advances in medical technology”.  The report projects the number of voters with disabilities that will be eligible to vote in the 2020 election based upon past and projected Census Bureau data analysis.

People with disabilities and their family members have the ability to swing the election this year. If you need help registering to vote, figuring out where to vote, what your rights are as a voter with a disability, new requirements for voter ID’s,  how to vote with accommodations and more, visit the following resources:

►  American Association of People with Disabilities

►   Americans with Disabilities Act (ADA) and the Right to Vote